This is the story of how Israel’s orange groves developed, with an emphasis on the relationship between employers and employees, Jews and Arabs, manual labor and technology.

For over twenty years, Amos Gitaï (1950, Haifa, Israel) has been making documentaries that concentrate on the history of Israel and the Jewish Diaspora. Because he always tries to show his topics in all their complexity and ambivalence and does not shy from political bottlenecks, he often clashed with the authorities in the past. In 1982, he felt compelled to emigrate to Paris, where he has worked ever since. In TAPUZ, he takes the history of the orange as his point of departure. After the Portuguese had transported the orange via the ancient trade routes from China to America and Europe, it was introduced into Israel. Some hundred years ago, orange plantations were laid out around the town of Jaffa. Today, the Jaffa orange has grown into one of Israel’s most popular export products. To many Jews, being dispersed across the globe in the course of history, the fruit – considered a luxury article in many countries – is a symbol of the Diaspora. But the success story of the orange cultivation also has its painful aspects. For years, the Jewish landowners have employed Palestinians as cheap labour during the harvest. But for the Palestinians it is almost impossible nowadays to go from the occupied territories to the plantations in time, with the result that fewer and fewer people manage to find a job and the landowners enlist mainly Russian immigrants and foreign workers.

This is the story of how Israel’s orange groves developed, with an emphasis on the relationship between employers and employees, Jews and Arabs, manual labor and technology. The possibilities for the development of Israel’s orange industry in the wake of the new political arrangements in the Middle East are intertwined with relevant literary texts and the occasional close-up shot from the world of botany and with historical photos and biographical anecdotes related to growing oranges. This film, which recreates all these elements, tells the story of the Israeli orange as a metaphor for the Land of Israel, from the end of the nineteenth century until today. 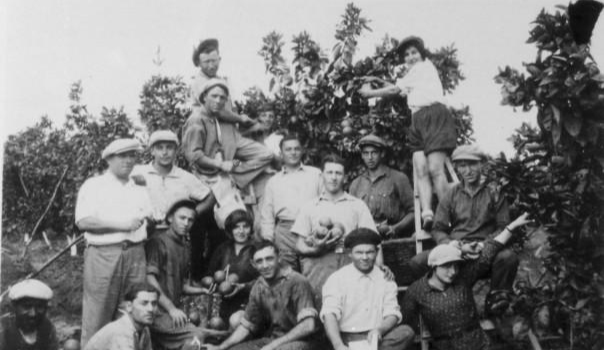